An Interview with author Claude Bouchard by CK Webb

On Thursday, Oct. 1, 2009, I had the sincere pleasure of conducting my very first author interview via phone and e-mail, with Canadian-born author Claude Bouchard. Mr. Bouchard lives and works in Montreal and has four self-published books to his credit. Vigilante, which he wrote in 1995, The Consultant, written in 1996, followed by Mind Games written in 1997 and The Homeless Killer written ten years later. Recently, Mr. Bouchard combined his first two novels, Vigilante and The Consultant into Duo which are available on Amazon.com.
I originally met Claude on the social networking site, Twitter and we quickly became friends. He asked me if I would like to read his first novel, Vigilante and review it on WebbWeaver blog. Of course, I jumped at the opportunity and enjoyed this book immensely. I recently asked if he would be willing to allow me to interview him for WebbWeaver and answer some questions from the ladies of the WebbWeaver Book Club.
He agreed and the interview follows:

CK: Thanks so much for doing this...I'm a little nervous.

CB: Thanks for asking me...I'm a little nervous myself.

CK: What was the pivotal moment in your life when you knew you wanted to be a writer?

CB: I had been reading for years; mostly espionage and crime thrillers but in 1995 I got an idea for a story. I didn't really know how to write but I just sat down and started and in two months I had a rough draft of Vigilante.

CK: Is there a line drawn between your art work and your writing?

CB: Not really. I try to concentrate on each equally and focus on them as I work on each particular art form.

CK: Has your writing inspired your art work or visa versa?

CB: Mind games was the inspiration for a watercolor and that watercolor is also the cover art for that particular novel. The art work also comes out in the writing through references to different aspects of art such as art museums, pieces of art work and the like.

CK: Where does you inspiration for your writing come from?

CB: From a lot of reading and the desire to write something that will pique someone else's interest.

CK: Are any of your characters fashioned after yourself, and if so, which one?

CB: Chris Barry has the same initials as myself. Chris Barry is much grander, much more handsome and more debonair fashioned after myself, who happens to do some things I would never do *chuckles*.

CK: In your opinion, what is the greatest book ever written...one answer?

CB: Pillars of the Earth by Ken Follett

CK: Who is your most inspiring author or who do you enjoy the most?

Tammy: Do you still enjoy writing after all these years?

Absolutely! I moved away from writing for pleasure for a number of years, not because I didn't feel like writing but simply because I was occupying my time with my painting, guitar and the day job! It really wasn't a conscious decision. It's more that it simply happened. While I was reviewing, revising and self-publishing my old manuscripts last spring, I found my old friends once again and an idea starting brewing to get them back into action. The result was The Homeless Killer which I wrote in about six weeks. Since, I've been spending a lot of time self-promoting my books but have managed to squeeze out three short stories and countless idiocies for the Simple Musings page on my site.

Tammy: Between your art and your writing, which do you enjoy the most?

I hope that "both" is an acceptable answer. I love creating things where I can express myself and let out what's inside. Painting is one outlet; writing is another and playing guitar, another still. Taking away any one of those would leave a very sad void.

Tammy: Who in the literary world would you say is your greatest inspiration?

If by "the literary world" you mean great literary fiction, I must confess that I've never been very attracted by the Hemmingways and Dickenses in terms of preferred reading. I tend to read mainly the same or similar genres as what I write and pinning down one author as an inspiration is quite difficult. John Grisham, Steve Martini and Scott Turow are great with legal fiction. James Patterson rules when it comes to fast-paced page turners. Michael Connelly, Robert Crais (especially the Cole/Pike novels), Jeffrey Deaver and Jonathan Kellerman all do consistently well in the crime genre, each with their own style. Lee Child with his Jack Reacher series also gets glowing praise from me. There are many others whom I haven't mentioned.

Tammy: How old were you when you started writing?

The first time I sat down to seriously write something was in 1995 when I wrote Vigilante so, I was 34.

Tammy: What is your next project?

I'm not even at the starting gate with this one yet so it may end up never seeing the light. However, I have been toying with some ideas and taking notes for a fifth in my Barry/McCall series which could tentatively be entitled Agents will Fall. Very briefly, it would involve a growing number of literary agents being murdered *smile* but let's remember that this would be yet another work of fiction!

Sonya: Does it get easier to self-edit with each book you write?

Not whatsoever! Self-editing is extremely difficult because you know what you are reading so your mind tend to skip over mistakes. If I use The Homeless Killer as an example, I'd type somewhere around ten pages then go back and read them and correct all the mistakes. Next was a printed copy which went to my partner, Joanne for her review and edit (yep, more mistakes). I then reviewed the printed pages again, usually making more corrections before going back to fix everything on the computer. Once the book was finished, Joanne and I reread the revised printed copy, both jotting corrections as we went. Then I submitted for publication and ordered a handful of copies. Jo and I read and corrected again. One copy went to my sister, Lucie, and she got back to me with a number of corrections (most of which Joanne and I had missed). Nope, it doesn't get easier! I do try to read aloud when self-editing as it forces me to read each word and notice missing ones.

Sonya: What literary work is your favorite?

As I mentioned earlier, literary fiction has never been my forte. If I was to pick a classic, it would probably be Steinbeck's Of Mice and Men. In terms of a more modern day epic of historical times, the winner is Pillars of the Earth by Ken Follett.

Sonya: Is there a particular teacher in your past who sparked your interest in reading and writing?

Not that I particularly remember. Both my parents are avid readers, even more so my dad and we were encouraged to read early on (along with everything else throughout our educations). That said, if anyone gets kudos for sparking interest in reading and writing (and learning in general) for myself as well as my brother and two sisters, it would be our parents, hands down!

In closing, I would like to thank CK, DJ, Tammie and Sonya for your wonderful questions and interest but especially for inviting me to do this interview!! WebbWeaver Rocks and Alabama's First Official Chapter of Book End Babes Rules!! Merci!
Posted by WebbWeaver at 7:57 AM 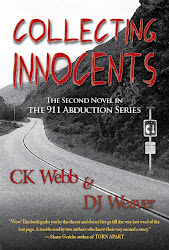 Please go by the 'Book Giveaways' and 'Featured Books' for a chance to win copies of great books every day. Just follow the instructions to win. Good Luck!